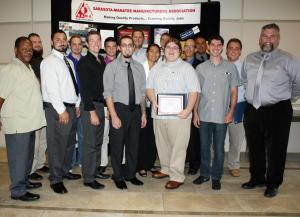 Sarasota County adult students have an additional educational option — precision machining. Proof of the need for such training in this area is the fact that every one of the first 16 students to complete the program at the end of June had a job or a job offer, according to a release from the Sarasota County School Board.

The program was created following a skills-gap study conducted by CareerEdge, a privately funded workforce-development group.

Seventy-five percent of respondents said that schools are not preparing workers with the skills needed in manufacturing. One employer said he needed more skilled workers to keep up the demand. With those workers, he would be able to fill 30 percent more orders.

Sarasota County Schools executive director of Career, Technical and Adult Education said the study confirmed what he already knew but quantified the issue. That led to a consortium of organizations proposing solutions and getting together to do something about it.

“Part of the impetus behind the CareerEdge study was to provide the school district with the data needed to support the manufacturing training,” Bowden said. “The study was definitive that the jobs were here in this community.”

Bowden’s next move was to create a space for the machining lab in the new SCTI facility and to develop the curriculum. To that end, he sought advice from area manufacturers —the people most likely to hire graduates of the new program.

In June 2013, Sarasota County commissioners approved $343,500 to fund the machining equipment needed for such a specialized classroom. The Sarasota County School Board also approved funding in the amount of $655,000 to support the first five years of the program that opened in August 2013, just two months after receiving its initial approval.  Career Edge also contributed $25,000 to help fund the equipment purchases.

Demand was so great that the first class filled immediately and had a waiting list.

That all of the first graduates have jobs is additional proof of the need for such a program.

Instructor Ed Doherty noted that some of the best students in that first class had no previous experience, which might have predicted such success. What they did share, according to the teacher, was the “courage and commitment to give their best effort to finding a new career path.”

Doherty shared information about the first students and in a press release from SCTI shared his feeling and their comments.

One of the first students, who had served in the U.S. Coast Guard, learned about the program through the Veterans Administration. Upon graduation, he received a job offer from a local marine custom builder.

Another successful graduate, Sean Tierney, had been employed in construction and woodworking. He soon was mentoring other students and servicing as Doherty’s “right-hand man,” the teacher said. He found a job making aerospace components in Venice.

Shaun Rauch, who switched fields from automotive to precision machining, received a job offer from a custom motorcycle manufacturer in Sarasota.

“After this short year, I’m going to be confidently walking into my new workplace, making an entry-level wage that is close to what I was making as an ASE certified master automotive technician at my old shop,” Rauch said. “I enrolled into the program as soon as I had heard it was open. I truly believe it was the best decision I have ever made. The demand for quality machinists is huge. The pay is high, the shops are clean and the work is very enjoyable. I can’t thank the people who made this class happen enough.”

There was just one woman in the first class. Pam Groom had no background in machining and was working as a third shift manager of a gas station/convenience store, heading to six hours of class from that job each morning.

She was already familiar with SCTI as a graduate of its two-year digital design program. A slow economy negatively impacted her ability to find jobs in that field so she decided to take a new career path.

Having mastered Computer Numerical Control machining, the state of the art in modern machining taught at SCTI, she was one of the top five students in the class. She received a job offer from JLM Manufacturing in Bradenton. The company produces aerospace and medical equipment.

Doherty said this experience could lead some of the graduates to pursue careers in engineering because “manufacturing in the USA is on the climb again and we are in the right position to take advantage of this opportunity.”

Students from Venice and North Port who were in the first class include:

Students in the machining class work with the newest equipment to learn new skills. 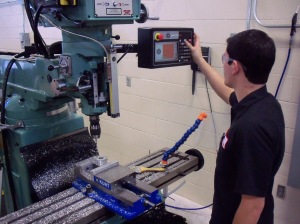 Justin Fritz from Venice working with a CNC milling machine 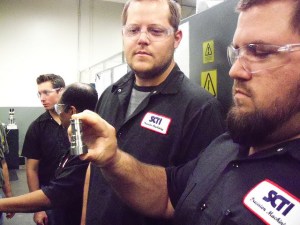 Porter Harris, left, and Andy Harris study a machined valve during a tour of the Sun Hydraulics factory they attended as members of the first class to graduate from the SCTI Precision Machining Education Program. Porter was hired by RD Concepts of Venice after graduation from the new SCTI precision machining program.

SCTI machining graduate Pam Groom works on one of the class machines while fellow student John Kinsey looks on. 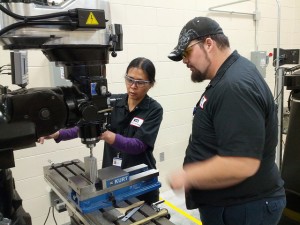